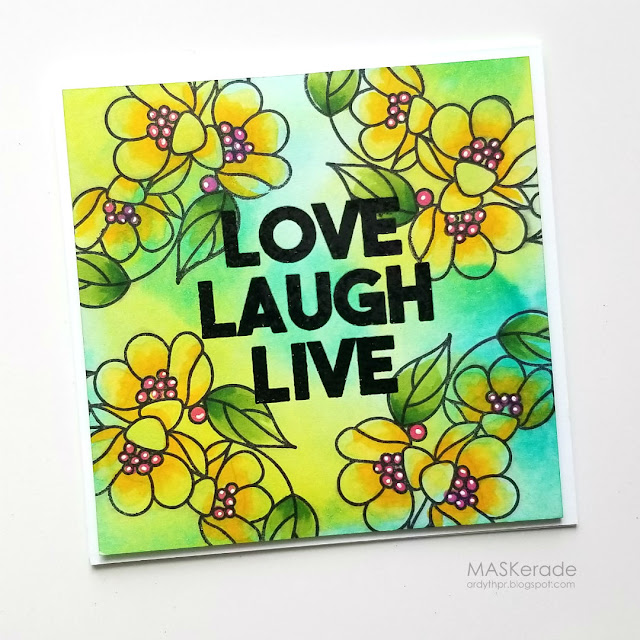 At this point of #thdailymarker30day I was really looking for a new way to colour. I had a bit of time last night to watch some YouTube videos and man, was I ever inspired!

Next, Sandy Allnock showed that you can use Copic Various Ink on Neenah cardstock here.

I started with the stamping technique from Jennifer which is really quite simple. Today's stamp for colouring is Simon Says Stamp Centre Cut Flowers, so I used that rather than a square background. I found that marking my grid worksurface helped me with positioning. I also had to move the stamp after I did 2 corners so that it would work for the other 2 corners.

I had a cool-looking stamped panel to colour. I trimmed it down for a square card (to cut out a smudge).

Then I decided to try out Sandy's method. I was a little worried that I would just ruin the panel and have to start over, especially when I poured the Colourless Blender solution over the panel and immediately I could see the pencil marks (and finger prints) on the back through the panel.

I decided to Play Without Panic and keep going. Hey, it's just paper, right? And later, as the paper dried, it became opaque again.

I pulled out a couple of Copic Refills and immediately left big blobs of unmoveable colour. But I didn't panic, just kept working (notice the final placement of my BIG, BLACK Simon Says Stamp sentiment! LOL!) ...adding more Colorless Blender, and working like you would with alcohol inks.

Once I was relatively happy with it, I set it aside to dry. I helped it along with my heat gun, too - no problem there. Then I just coloured in the leaves, flowers and berries with Copics as usual, adding some highlights with a white gel pen.

Here's a video - because I did this last night, the lighting is not ideal, but I was excited to show you how I made this pretty card!


Posted by Ardyth at 12:00
Email ThisBlogThis!Share to TwitterShare to FacebookShare to Pinterest