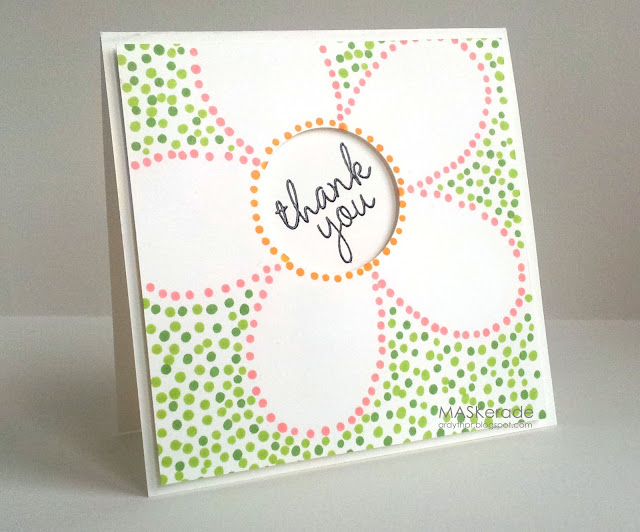 OK, this card is for those of you who called me the "crazy dot lady"  (I know it was said with love! lol!) for this card I made as my sample for this week's CASology Cue Card, Bloom. I hope you'll get a chance to play along - the deadline's tomorrow at 4:00 pm CST.

And it's for one of you who last week wondered if her card was CAS enough for CASology. I mentioned in my comment that I had made two for this week's Cue Card, but opted for the one with more white space. But it shows how one idea can go in different directions.

And finally it's for the person who wondered how many takes it took before I landed on the card I actually used for this week's challenge (let's see, there was one with Stickles (yuk!), 3 with glossy accents, (which I thought was SUCH a good idea, but I couldn't actually hit the dots exactly and ended up with 3 gooey messes) and this one here, so I guess you finally saw number 5, which really proved that sometimes less really is more!)

This card used the same original idea, but kicked up a notch or two.  I quite like the 'mosaic' feel of this, created with two green copic markers, and completely eliminating the white space, which is really what takes it out of the CAS realm. I also messed up the centre, so I just cut it out and popped up the layer over this Hero Arts sentiment.

Finally, I should say that this technique is really quite simple and soothing and not even all that time consuming once you accept that you'll never make the dots all the same size! ;-)

Email ThisBlogThis!Share to TwitterShare to FacebookShare to Pinterest
Labels: CASology, Thanks

What a great technique Ardyth-this looks fabulous :) and i am soooo glad to see i am not the only one who has several takes at a card before getting it right LOL!
Have a lovely weekend,Nessa xx

Hmmmm...now I seem to remember mentioning in one of my Casology cards that I didn't think it was CAS enough! I think this is perfectly CAS Ardyth, despite the lack of white space. And I love that it's your 5th attempt. I'd have binned it well before my 5th attempt! No wonder your cards are always so perfect LOL!

I happen to love the "crazy dot lady". Your designs never cease to amaze me Ardyth! I love all the fabulous dots1

Going pointillistic! Reminds me about Seurat.... Like this one better than the first version!

Thanks for sharing your fun cards and great ideas & inspiration. ;-)

What a great idea to create a mosaic effect with copics! I love how this turned out...awesome card, Ardyth!

Love your CAS card Ardyth, it reminds me of the colour blindness tests we had as children but of course yours is much more decorative LOL
p.s your dots look very regular to me:D

This is just so amazing. What a great idea, and I am going to try it one day when I feel super brave.

This is just as fab as your first one. Thanks for persevering!

Amazing, inspirational and entertaining all at the same time, Ardyth ... I think it's pretty much CAS too with all that white space in the flower! Puts me in mind of Dreamtime art ... Anita :)

It warms my heart to hear you have troubles sometimes, too. But you sure know how to make a silk purse out of a sow's ear. Lovely card.

You must have been dreaming dots after finishing this card! And yes, the crazy dot lady was totally said with love...and admiration for your perseverance!

I love how your first row of dots follows the shape of the petals, but then flares out to beautiful randomness! Amazing steady hand!

Oh my goodness--I think I like this one even better than the first!

It reminds me too of the colour-blindness tests. It's still CAS because there's so much white space inside the flower design. Gorgeous!

I'm a tad partial to the first version you posted with all the white space, but I think I would still classify this as CAS. It just has a lot of green dotty space as "white" space!

wow. just wow. That sums this up.