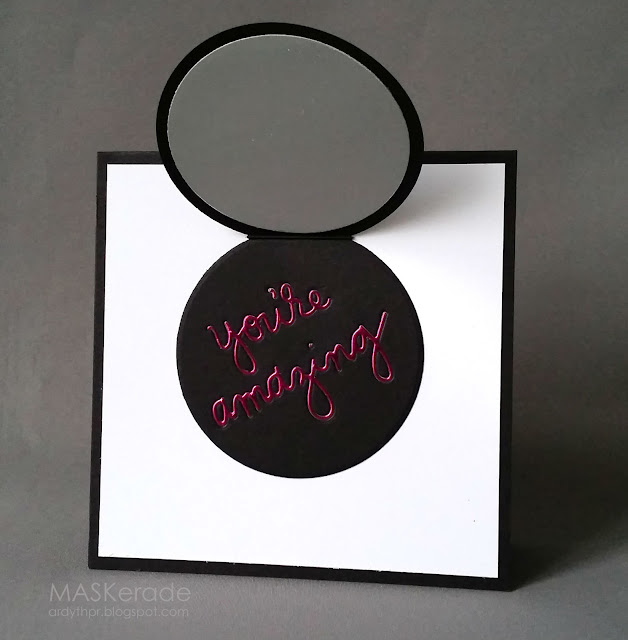 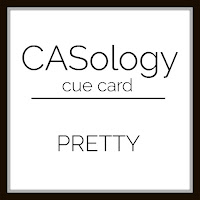 My mind automatically went to flowers, but when I dug a bit deeper, I realized that this poor little word has a lot of baggage! Seems like we all want to be pretty, but we're not really supposed to because (as we all know), it's what's inside that counts. And I know that to be true, but hey, it doesn't hurt to brush your hair or put some lipstick on every once in a while, does it? So I made a compact. When you open it, there's a mirror so you can see that you're pretty. Because you are. And there's some words that remind you to focus on much more than how you look.

Here's a look at the card with the compact closed. I used a trick from Michele's book, of embossing black on black on the top for some shine, texture and interest. (I put a little video on Instagram) 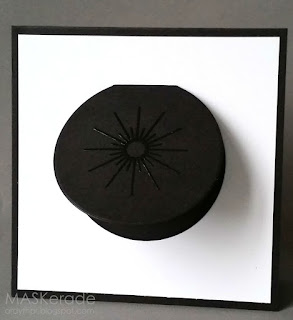 I used a circle die on folded black cardstock to create the compact. I used a slightly smaller circle of silver mirror card for the mirror and I used Simon's "You're Amazing" dies cut in pink mirror card. The outside of the compact is stamped with a Winnie&Walter Sparkle stamp.

I think that despite the 'action' on this card, it remains CAS due to the white space and simple colour scheme.

Now it's your turn. Be sure to check out the rest of the DT for some more inspiration!