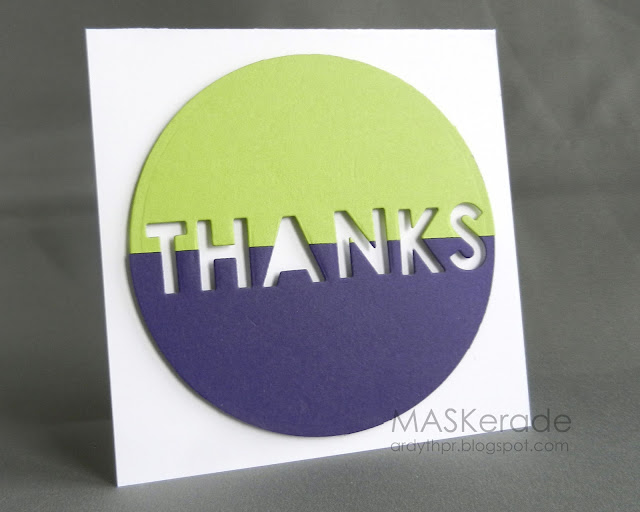 Time for this week's Muse - Therese Calvird and her fun card. Look at how she's coloured that limeade - it practically glows! 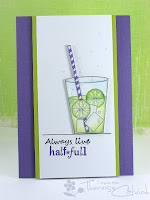 I focused on the colours and the 'half' idea, and the grateful, optimistic feeling of the sentiment. I cut two circles with a nestability (anyone else finding after time that they don't cut so cleanly anymore? Is there a fix or do I need new ones? I don't think it's the Cuttlebug, which is admittedly old, but other dies work fine - just some of my favourite circles leave little 'hairs' on the edgeand I hate hairy circles! lol!).

Anyway, to get close to perfect half circles, I laid the circles on top of each other and cut them in 'half' at the same time using my judgement (and my paper cutter!). When you cut the same shape at the same time, you know the two pieces will fit together perfectly, even if they're not cut perfectly on the diameter of the circle. So I used the 'right' half of the green and the 'left' half of the purple and I taped the two halves together. Then I used Memory Box's Parker Letters to cut the sentiment on the line. Finally I popped the circle up with dimensionals.

I have to admit that when I first saw the sentiment on Therese's card, I thought, "why settle for half"? As my dad always said when we brought home a near perfect (or even perfect) test score, "That and better will do!"  I guess I'm a half-full (or better) kind of girl!

BTW - last week's card was voted (by the Muse participants themselves!!) as one of the top 3! Thank you so very, very much!

Posted by Ardyth at 00:30
Email ThisBlogThis!Share to TwitterShare to FacebookShare to Pinterest
Labels: MUSE, Thanks