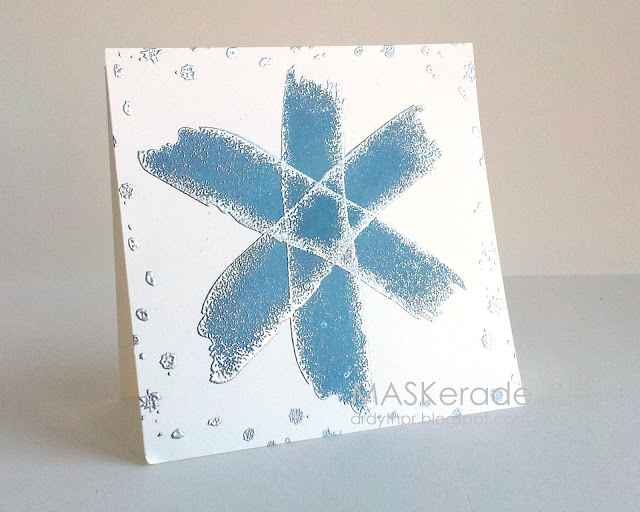 This card, for OLW 119 (Blue and Silver) was inspired by this photo on my Inspiration Board on Pinterest:

I thought it could make a cool abstract snowflake, so I got out my The Craft's Meow Typically Teen set and used the paint swoosh. I rock and rolled the stamp in versamark before inking it up with Marina Mist and stamping it onto Whisper White.  I wanted the silver just on the edges of the snowflake.

What a surprise when this funky Star of David appeared! Perfect card for my daughter's Jewish teacher along with his "Christmas" present of Tickleberry's (chocolate covered blueberries from British Columbia).

This is my first-ever Jewish card (even though it was unintentional). My daughter's school has quite a few Jewish teachers and from time to time, they ask if I make Jewish cards. I haven't in the past (despite owning Mazel Tov, the Papertrey set), because I don't know much about Jewish traditions and holidays  and I would hate to get the colours or symbolism wrong (even now, I'm wondering if it's offensive to offset a Star of David like this - any advice greatly appreciated!).  Maybe this will be the year I sit down with one of the teachers and discuss some designs.
Posted by Ardyth at 00:30